Before moving to South Florida from New Hampshire, I used to listen to Jimmy Buffett music all the time as a way to escape the long, cold New England winters. I'd turn up the heat, take off my shoes and socks, and put Jimmy on the stereo.

Most people don't know that Jimmy's smile on "Off To See The Lizard" prompted me into becoming a writer.  As a gift to myself for my 40th birthday, I wrote what I called a "little story". When contemplating what to write about, I popped this cd into my Bose and thought, "Gee, I'll write a little story about that smile and what I imagine was behind it."


The goal was simply to amuse myself. Eight months and 10,000 words later, I realized I was onto something.The little story became a novel which eventually led to the Pug At The Beach books.

And to this day, I still wonder about what made him smile like that.

Now that I play ukulele, well, this just opens up doors to all sorts of interesting adventures!

Here's the link to the original post on BuffettInfo.com:
http://www.buffettinfo.com/front-page-news/2641-buffett-ukulele-songbook-released.html#axzz1BKRocSkO

And here's the link to Alred Music Publishers:
http://www.alfred.com/Products/Uke-An-Play-Jimmy-Buffett--00-36799.aspx

Now, get out there and make some music!
Posted by Jackson Dunes at 1:38 PM

Links "At The Beach "

The Ukes I Play 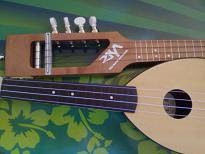